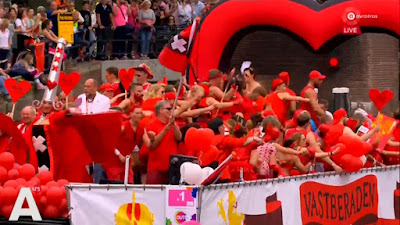 ... and thinking out loud about discrimination, tolerance and acceptance.

Let me introduce myself: I'm straight, single mother, 60 years old, half Indonesian, working full time. From the moment I can remember people (incl my mother) told me, 'act normal', 'dress your age', 'act your age', 'poor Micky Puck' (my daughter), 'you're weird', 'blauwe' (blue one, negative nickname for an Indonesian halfbreed), 'you're a woman with balls', 'you're so strong, don't wine, you can deal with everything', 'you're arrogant', 'why do you have such an attitude?', 'you're a bitch', et cetera et cetera.  All in a negative way. Very annoying (mildly put).

I realize that gay people, the whole lgbtq+ community, have this feeling at least a couple of times a day.

I can go on like this, but I won't. I'm not saying that they're all assholes. There are also nice people who think like this. I guess they believe certain media, they're not using their own brain.

In general, start with yourself if you want to change things. Have your own opinion. Be open minded. I realized this when my daughter was younger. She didn't like it then, but a week ago she gave me a compliment, saying she was happy that I taught her to use her own mind.
And small things, she wasn't allowed to use expressions like 'that's so gay', 'he/she is such a mongol'.
Her teacher at kindergarten once told me: 'Micky has a boyfriend', I told her 'Micky has a friend, I don't want you to use expressions like this about my daugther'. (and yes, I was weird again).
Friends blamed me that I was/am too sensitive about this, it's just fun, an expression, it's not your business. I always replied (and reply), if nobody does anything, nothing will change.

About 'other' people I taught my daughter: When you see someone, unconsciously you put someone in a box, in a box you created in your own head. The difference is what you do next. Most people walk away or get agressive when they, themselves, put someone in a box which has the label 'weird, I don't like'. What you have to do is talk with this person. You will be surprised that often you will put this person in another box.
For me there are two kinds of people: people I like, people I don't like.

I can go on like this but I won't. Hopefully the point I want to make is clear.

If you don't understand this? Start using your own brain instead the opinion of other people, the media. Approach people the way you want to be approached. Be yourself and accept others.

I have questions though. Perhaps someone can tell me why people act differently to my daughter because of me (already when she was very young) and why are people so agressive (or afraid?) of 'other people'.
Posted by Sylvana Knaap at 13:58